One of the production companies of the show revealed its name
in the boilerplate of their current press releases. It is:

Correcting double standards one bag of dicks at a time. #Neighbors2

How Zac Efron went from first crush to comedy beefcake

He rocketed to stardom in High School Musical as a clean-cut all-American kid. But Zac Efron is now notching up a string of muscular comedy performances to match his pecs

Don’t laugh, but Zac Efron is shaping up to be one of the funniest actors in American cinema today. When he starred in 2014’s Bad Neighbours as a hot-but-dim party animal whose shindigs make life hell for the nice couple next door, it was a light-bulb moment. Efron was a scream: who knew? Only a small group of cinemagoers who had seen him two years earlier as a dippy stoner in the 2012 indie comedy Liberal Arts. But it was Bad Neighbours that should be credited with inventing the Zac-com, a mini-genre that also includes Dirty Grandpa, Bad Neighbours 2: Sorority Rising and his latest, Mike and Dave Need Wedding Dates.

In its emphasis on preening complacency, his performance in Bad Neighbours mocked a culture that deified him for his body, even as he reaped its rewards. The revelation wasn’t merely that he was a comedian but that he could be amusing, in a self-referential way, by mocking his himbo image. In Bad Neighbours 2, he warns co-star Seth Rogen not to put eggs in boiling water – “You’ll melt them!” – and comes out with such slogans as: “There’s no ‘I’ in sorority!” The joke is on anyone who believes an actor this ravishing could not also be smart enough to exploit his looks for laughs.

In trying to speak to film-makers who have worked with Efron, it became apparent that there was nervousness surrounding his career makeover, or at least suspicion regarding anyone who might claim to admire it. Three directors declined to be interviewed while a publicity assistant called to ask for a detailed explanation of my angle, fearing he might get in hot water for helping with a take-down. There was a genuine sense that someone who wanted to celebrate Efron’s comic skill couldn’t be serious.

Dan Mazer, the British director of Dirty Grandpa, in which Efron starred as the prim grandson of priapic pensioner Robert De Niro, says he can understand that scepticism. “To be brutally honest, it was with a certain amount of circumspection that I initially took on Dirty Grandpa,” he says. “When I heard Zac was already attached, I took a beat. But then I looked at some of his other comic work and I thought, ‘Hang on, he’s really good’ He understands what he is, the difficulty of where he came from, and what it feels like to be hamstrung by all that. He’s unfairly tarred with that brush of being insanely good-looking. You can’t imagine that someone so beautiful could be funny as well. Why would you be? If I looked like that, I wouldn’t worry for a second about being charming or funny. But he does and he is.”

Mazer, who with Sacha Baron Cohen developed characters including Ali G, Borat and Brüno, is unequivocal about Efron’s flair for comedy. “I like to do improv on set and most of the cast were bona fide comedians, but Zac matched them all punch for punch. I thought he’d be this high-maintenance flibbertigibbet but he was often driving the comedy. He was determined to stretch himself.”

In this context, it’s disappointing that Mike and Dave Need Wedding Dates doesn’t use Efron’s talents to the full. In this tale of two hell-raising brothers who can only attend their sister’s wedding if they are accompanied by respectable dates, he is largely left to make goo-goo eyes at his female companion and to develop a conscience; while Adam Devine, as the more reckless Mike, kicks up a slapstick storm. But there is still enough comic sparkle to reward Zac-watchers. It’s all in the sincerity of the delivery: his Dave may be only a few rungs above brother Mike on the intellectual ladder (Mike thinks “ultimatum” is pronounced “old tomato” while Dave is at least in the ballpark with “ultima-tomb”) but he cherishes that advantage.

Like any Zac-com, Mike and Dave conforms to certain conventions. There must always be a moment when an awestruck supporting character remarks upon Efron’s handsomeness. “He’s hot as balls,” says one admirer while, in Bad Neighbours 2, he is described as “a beautiful centaur”. A droll observer in Dirty Grandpa sighs: “He looks like Abercrombie fucked Fitch.”

Then there is the obligatory scene in which Efron disrobes. The most spectacular examples occur in Bad Neighbours 2, where onlookers compete to smear his torso with chicken grease prior to an erotic dance; or in Dirty Grandpa, where he peels off in an on-stage muscle contest, only for the strain of flexing to result in flatulence. Mazer is unapologetic about the need to show the goods. “It’s like a superpower. You have to reference it. I did toy with the idea of asking him to put on 30lb and let himself go. Then I realised it would be incredibly disappointing for the audience. To not reveal that body would be like showing Superman but not letting him fly.”

Part of the thrill of seeing Efron take flight now is that he seemed for a while not to know how to put some distance between himself and the squeaky-clean image cultivated during his years on Disney’s High School Musical franchise. He had a fair stab in the overheated 2013 melodrama The Paperboy, brooding endlessly beneath the canopy of his magnificent eyebrows and allowing Nicole Kidman to urinate on him to alleviate the pain of a jellyfish sting. “If anyone’s gonna piss on him, it’s gonna be me!” she rages at her fellow sunbathers.

But comedy has liberated Efron, allowing him to trample all over his own teen-idol past. In Bad Neighbours 2, he repels the crowd by revealing too much during an onstage striptease, his pendulous scrotum dangling before our eyes; while in Dirty Grandpa, he smokes crack and gets mistaken for a paedophile. “It’s all part of that quest to get away from his roots,” says Mazer. “He didn’t baulk at doing any of the extreme things I asked. It’s tough because he was such a part of so many young people’s lives. He was their first crush. But he has shown he can transcend that. What I think he needs to do now is something that isn’t an R-rated comedy. He would be great in an action movie: a Tom Cruise/Matt Damon kind of thing. He has that in him. I really feel he could do anything.”


Not embeddable: SheKnows and USA Today

Biles sits atop all Olympic athletes from all countries as the most retweeted athlete during the Games, with four of her tweets in the top 10, including the No. 1 tweet of her with actor Zac Efron.

Skateboards for the Final Five

4. Finally have that pizza party with Zac Efron.
You've won gold, what are you going to do next? For the Final Five, that answer is a pizza party with the one and only Efron, which shouldn't be a problem to schedule if Biles does the coordinating.

Michael Hixon knows you think he looks like Zac Efron.

The 22-year-old from Amherst, Massachusetts, has understood that people see a resemblance between him and the Hollywood actor long before winning an Olympic silver medal in men’s synchronized diving (3m springboard) during the Rio Games, and long before he and Efron took a photo together in Rio that was featured on Efron’s Instagram.

In fact, Hixon’s friends at Indiana University diving camp would joke with him and try to get him to perform High School Musical songs as Efron during the talent portion of camp every summer. Last summer, Hixon obliged and performed “We’re All In This Together” from High School Musical.

Hixon says that he and synchro partner Sam Dorman were chatting about how the latter—who is a professional and can make money off the sport—could “get his name out there.”

“We were just joking,” Hixon tells GOOD, “and we said for me, if I were a pro, I would try to get something off of [looking like] Zac Efron—how would I reach out to him.”

“It just so happened that we ran into each other at the track while we were both there watching Usain Bolt,” he says.

And so came the photo.

Zac Efron set the tone by showing up to Rio and playing along with the idea to surprise USA gymnast Simone Biles and the rest of the ‘Final Five’ inside the International Broadcast Centre’s NBC studio. And surprised were they ever. The segment took the social media world by storm and it was really just a big hit that reached a wide audience.

Here’s a shot I snapped of Zac watching the surprise segment for the first time from our set: 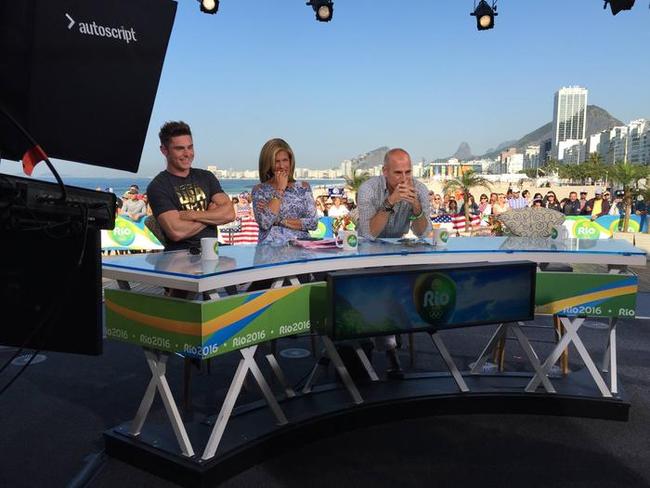 
"I started working out and put on a little bit of weight, but then I show up and Dwayne Johnson is so huge that I might as well have saved my money! He and Zach Efron [sic] are so charismatic and humble, it was fun. I never told them I couldn't swim. That would have made for some comedy."

^ Amusing anecdote: Michelle's former assistant saw the tweet and sent Michelle a screencap of it
with a comment along the lines of "He's still crushing on you."


Britney Spears on Kyle and Jackie O via news.com.au

In other groundbreaking news to come out of the “What Would You Rather?”, Spears revealed that she’d rather swap lives with Mariah Carey than Elton John (we follow Mariah on Instagram and we feel exactly the same way), and would rather go Pokemon hunting with Zac Efron than Justin Bieber (because it’s Zac Efron, DUH).

Seth on WWHL via E! Online

During the Watch What Happens Live after-show, at a viewer's request, Seth agreed to play a round of "Shag, Marry, Kill" with three of his former co-stars: Zac Efron, James Franco and Jonah Hill. "Tough one," he said. "They're all so sensitive, so it's tough to answer this question."

"Are they?" Cohen asked.

"They really are! Yeah! Actors are very sensitive. I'm just trying to think who could emotionally deal the best with me saying I want to kill them right now. I'm going to say Franco, just because I think he could deal with it the best," Rogen said. "From there on, I'll f--k Zac and marry Jonah."

"I could easily live with Jonah, though," he added. "For years."

Melora Hardin on the Allegedly podcast about wanting to seduce Zac: