Mike and Dave: Winding Down

Thanks for the heads up @TheEllenShow! 😊 Good luck at the Olympic trials @Simone_Biles! #Rio2016 https://t.co/DMVwizWKPI

Nothing better than veggie spring rolls with best friends and seeing a movie...That's what @mikeanddave would do. pic.twitter.com/qIWHo6v5XH

Finally got to unleash #MikeandDave out into the wild this weekend. Can't thank you enough for all the Stangle love! pic.twitter.com/Yl1fQ1TcwU

These weirdos showed up pretending like I wouldn't recognize them chanting #MikeAndDaveNeedWeddingDates this Friday! pic.twitter.com/p3HbvU7fOu


I'm getting married. In a movie. Mike and Dave Need Wedding Dates. See it on July 8th! #MikeAndDave https://t.co/tkscYYIfYB

Mike & Dave Need Wedding Dates opens today. I'm not in it a lot, but a lot of me is in it. You'll see what I mean. Don't tell my parents.

It’s date night with #MikeAndDave and their Wedding Dates! See it in theaters today. https://t.co/Oj8RIvpFOM pic.twitter.com/zjPpHq7Ana

Feast your eyes on this summer’s funniest comedy. #MikeAndDave is in theaters now! https://t.co/Oj8RIvpFOM pic.twitter.com/ZsLcumwH1c

#MikeAndDave takes home the 🏆 for best comedy of the summer. See it in theaters NOW! https://t.co/Oj8RIvpFOM pic.twitter.com/xpo5pcKoQU

The final number on Monday for the weekend was $16.6 million. Not bad. And I like that the press has it as 'beating expectations' (which were $15 million). I wish it would have broken out a little bit more but there was nothing in the Twitter or Facebook activity to really suggest that would happen. I am surprised the Cinemascore was B, like Neighbors 2. I thought this would do better. I'm also pleased the audience was almost half men, half women. That's good news for Zac and hopefully will give it more legs.
From THR:

Elsewhere, Fox’s R-rated comedy Mike and Dave Need Wedding Dates, starring Zac Efron and Adam Devine, also exceeded expectations in grossing $16.6 million from 2,982 locations, thanks to a strong turnout from younger moviegoers (50 percent of ticket buyers were under the age of 25) and a strong dose of males (48 percent).

"It's a movie for everyone," Fox domestic distribution chief Chris Aronson said Sunday. "We haven an original, R-rated comedy that's resonating with audiences. It's a relatable concept, and a great escape."

Outside of the Neighbors franchise, the $33 million film marks one of Efron's better recent openings and helps soothe the sting of 2015 box-office bomb We Are Your Friends. The raunchy film debuted overseas in its first 19 markets with $3.7 million for a global bow of $20.3 million.

Junkee, Katie Cunningham. This is almost more about the process of junkets than Zac and Adam, but that's interesting too.

“If you want a selfie, you have to take it in your six minutes.”

Those are the parting words the publicist gives me as I step into a hotel room in Sydney. Like just about every other media organisation in the country, I have come to interview Zac Efron and Adam DeVine, the stars of Mike and Dave Need Wedding Dates and 2016’s latest goofy comedy. All of us have been given an interview slot that is exactly six minutes long, with mine set to start at 1.42pm sharp.

I spent a number of hours constructing a list of questions I hoped would both provoke insightful responses and subtly convince Zac Efron that I am the woman he is destined to marry: Does he think he will one day have to break away from comedies to become a “serious actor”? Does he agree that his body is shown in movies the way female bodies typically are, with gratuitous and lingering shots? Did he take the role in Bad Neighbours 2 because of its feminist undertones?

I plan to come away with a piece that explores how Zac Efron is part of a new breed of movie stars, like The Rock or Channing Tatum, who isn’t afraid to make fun of himself, and how he has real star quality but sometimes picks bad movies. I will write a little bit about his eyes, which are a piercing green and not the blue they sometimes look on screen, without going full Vanity Fair. I will include a few lines about Adam DeVine so he doesn’t feel left out. It’s a nice plan. But six minutes, it turns out, is not very much time to do an interview.

I walk into the room and shake hands with both actors. “I don’t know if you are meant to shake hands in these things, but I’m going for it,” I joke, wasting precious time. I place my handbag on the floor in a spot I hope is not in the shot, wasting more time. By this time, I have probably wasted a whole minute without realising it.

“Adam I know you’ve always been a comedian but Zac, you’ve only moved into making comedies more recently-”

“Until a few years ago,” DeVine interjects. “Well I got really serious recently, so I’m going to go down that road.”

“Adam is at the point where he is almost too funny.”

“Yeah, watch how serious I can be,” DeVine says, pulling a Blue Steel-style expression that I do not know how to react to.

This double act goes on for two whole minutes. Efron and DeVine are professionals who know they are there to perform, who are in the middle of what is probably a very monotonous press tour where they are asked the same questions over and over, and who are not at all to blame for my shitty interview. When they look over at me, they can probably see my face contorted in a mix of horror and anxiety. I want to tell them that they can relax because I am a writer and that despite the fact that all interviews are filmed, I do not plan to use this video footage anywhere. But that will take up more time, so I push on.

“Do you have be willing to embarrass yourself to be good at comedy?”

“People are having careers where they are funny people and then they go off and do dramas and they’re the funny person in that drama, which I think is cool,” DeVine says. “Like Matt Damon,” Efron chimes in. “He’s such a great actor, he’s so versatile. But then in The Martian he is so funny, he carries that entire film in a very funny way… I don’t know what tangent I’m going on, I just like Matt Damon. I heard he’s here, in this hotel.”

Just as I am wondering how I going to rescue this interview from the infiltration of Matt Damon, a film operator sitting to my left raises one finger at me. “Does that mean I only have one minute left?” I ask, breaking the fourth wall and proving to everyone in the room that I am an idiot. He nods.

“Oh god, oh god,” I say out loud, because I am an idiot. I flub out a question about their co-stars, Aubrey Plaza and Anna Kendrick, who were the best part of Mike and Dave Need Wedding Dates. The movie’s plot centres on Efron and DeVine’s titular characters, who are instructed by their parents to bring dates to their sister’s wedding to keep them from causing trouble and ruining the day, something they have a history of. They hunt for two “good girls” to bring to the wedding and land on Plaza and Kendrick, who turn out to be weed-smoking, porn-watching party animals. And so the jokes begin.

Then remembering the publicist’s word of warning, I ask for a photo. Only not even this goes according to plan, because I am wearing heels and DeVine and Efron are both at the petite end of the spectrum. So when I go to stand between them, I am immediately taller and crouch down to meet their height without meaning to. As soon as I begin this crouch I realise I have done something terribly emasculating and try to correct myself, but it is too late, the damage has been done and Zac will never ask for my hand in marriage. At this point it’s clear that it is time for me to leave.

“Hopefully you got something usable in there,” DeVine says to me on the way out. Well, it’s the thought that counts.

This kind of makes you go, maybe this is why interviewers are shitty. Like they realize there is little point in really trying because it all ends up the same? I don't know. Just sort of fascinating. 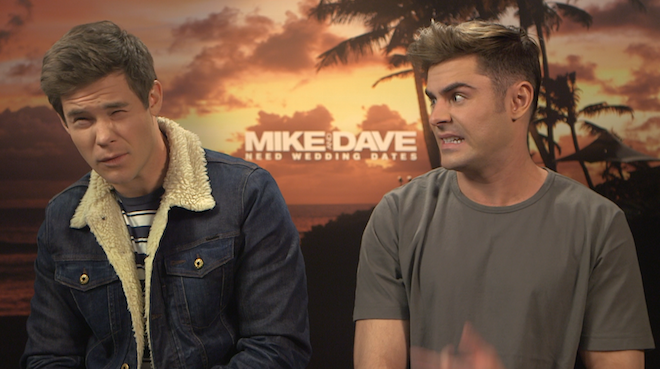 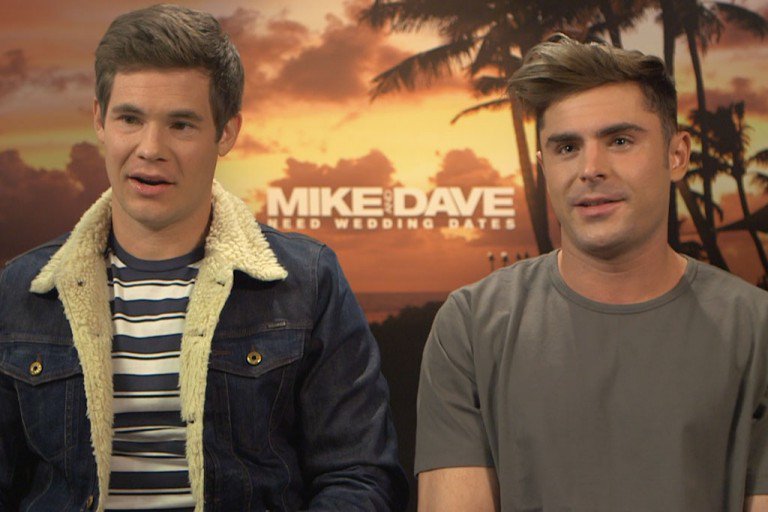 ALSO: SO FUNNY but can't embed, News.com.au, in which Zac and Adam switch places. Also Hit30, not as funny, side note: turn the volume down for the screeching.

BTW, the soundtrack, including "Stang Life", is available on iTunes , in fact you can get that track as a single which is really nice of them tbqh since surely that is the track most people are interested in.
Tags: @zacefron, adam devine, australia, box office, interviews, junket, mike and dave, radio, social media, videos
Subscribe