Zac Efron and Amber Heard have boarded IM Global’s chase thriller Autobahn, which Eran Creevy will shoot this fall on location in Germany.

In the script, written by F. Scott Frazier and Creevy, an American backpacker (Efron) is hired as a pickup driver for a gang of German drug smugglers. But when a job goes awry, he’s forced to flee from his employers, leading to high-speed chases around Munich. Heard will play his girlfriend.

IM Global, which will shop the project to foreign buyers in Cannes, says Autobahn is in the spirit of Gone in 60 Seconds and Unstoppable.
More about the film…

An interview with Creevy from thisisfakediy.co.uk:

Although he wrote his first two features, Creevy is preparing to shoot someone else's script as his next film, the much-touted F. Scott Frazier screenplay Autobahn, which will go into production in Germany this year or next. "I went in and did the last draft of the screenplay. It's a weird action film: (500) Days of Summer meets Speed. It's about an American backpacker who gets embroiled with these drug dealers and has to get back across Germany to his girlfriend in Munich. It's this mad dash and tells their relationship in a Michel Gondry-esque way. Scott came up with these very cool transitions how it goes into their past; it's a very cut-up narrative about their relationship in a Blue Velvet way."

Casting on Autobahn is underway this very moment, although Creevy can't mention any names. "There's an A-list actor in America who watched Welcome to the Punch and responded to it very well. So I'm flying out to LA to meet him next week. When I mentioned him to my nan, she went 'Ooh really? He's quite hot!'" 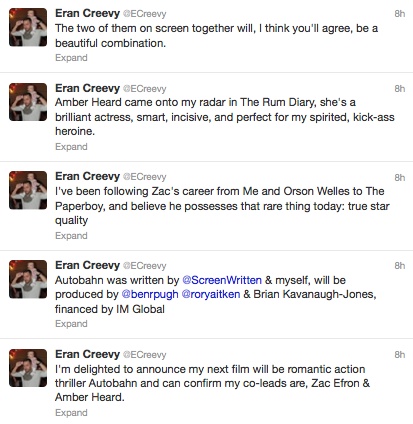 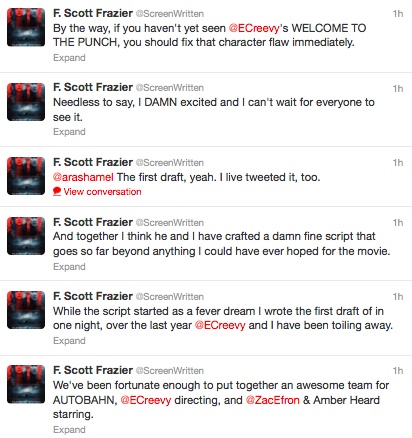