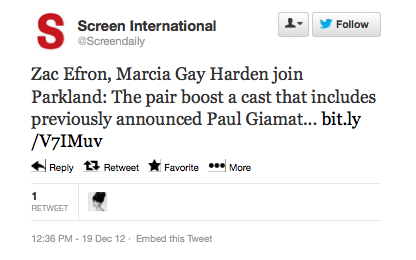 Zac Efron and Marcia Gay Harden have joined the cast of "Parkland," the indie drama about the assassination of John F. Kennedy that will mark the directorial debut of scribe Peter Landesman.

Efron will portray Dr. Charles Carrico amd Harden has signed on to play the part of a nurse.

Paul Giamatti, Billy Bob Thornton and Jacki Weaver came on board during AFI in late October.

Variety first reported on Aug. 16 that Playtone partners Tom Hanks and Gary Goetzman were producing "Parkland" and Exclusive Media came on board in October to produce and finance.

Pic chronicles the events leading up to JFK's assassination and Abraham Zapruder's famous documentation of the event. The title refers to Parkland Memorial Hospital, where Kennedy was rushed on Nov. 22, 1963 and later pronounced dead. Two days later, his assassin, Lee Harvey Oswald died at Parkland.

As part of the production deal, Exclusive Media optioned the rights to the book which provides the source material for the film, "Reclaiming History: The Assassination of President John F. Kennedy" by former prosecutor Vincent Bugliosi. The work was published in 2007 by W.W. Norton & Company and won the 2008 Edgar Award for Best Fact Crime.

Landesman is adapting the screenplay. The film, to be shot in Austin, Texas, is being planned for a 2013 U.S. theatrical release to coincide with the 50th anniversary of the assassination.