they want more for you like we do but they can't stand shitty movies! 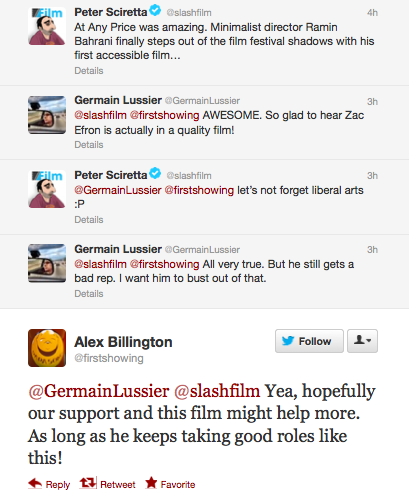 Nearly every aspect of At Any Price is spectacular, and Bahrani does not miss a single detail. From the very start, which opens with Super 8 cam footage of the family growing up, to the score, to the performances, to the intricate story itself, to the human relationships and characters. Even what the local community thinks of them, and the dynamic relationships between farmers and customers and corporations, it's all there, and all accurately portrayed. It's beautifully shot, tremendously acted (by Quaid and Efron) and honestly, very affecting. The emotional journey this film took me on was phenomenal, and I did not expect it at all.

Bahrani's cast in At Any Price, despite containing some of the first well-known actors he's used, like Zac Efron, Dennis Quaid, even Heather Graham and Clancy Brown, all melt into their characters, delivering powerful performances. Quaid gives one of the best performances he's ever given, and newcomer Maika Monroe (as Efron's young girlfriend) also stands out quite a bit, along with Efron. Believe it. Actors, even those who've given mediocre performances in the past, can be improved by a talented director who knows what he's doing, and inherently knows the story and all the characters in it top to bottom.

The Ebert article/sort-of review got pulled so out of respect, I'm going to wait until they release it next week (at the right time) to post excerpts.