Please do not post or reference elsewhere. Telluride might be even more offended than Venice by a schedule leak since they don't officially release their schedule till the first day of their festival, lol.

It seems like 99% sure that At Any Price will play at Telluride, the new hip film festival, lol.

If you recall, in comments earlier

jeezbee pointed out her theories on the TIFF large theater placement and priority press screening for At Any Price and how maybe that means TIFF is expecting a lot of heat off of the Venice screening and also possibly (hopefully) a Telluride screening.

There were also other indicators. It's been on Bahrani fan wishlists (which doesn't mean a lot). But then someone on twitter actually mentioned that a leaked (later revealed to be bullshit) Telluride schedule was missing at least one film he knew was going. Which is notable when you realize that someone is a student of Bahrani, so he actually would know.

In the end, the twitter comment deduction seems to be right... at least according to production notes we've obtained. From the first page: 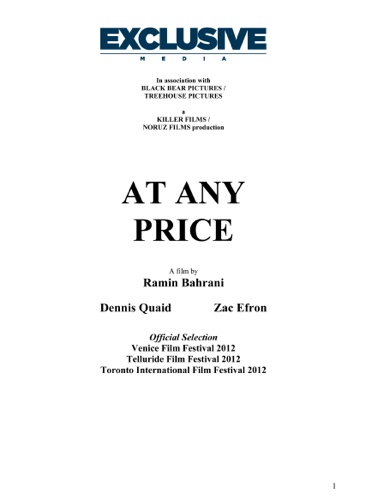 Plus later they quote Michael Pollan's notes in the Telluride guide:

AT ANY PRICE takes us on a harrowing journey into the modern, post-Monsanto farm belt. This is a place where the pressures on farmers to “expand or die,” as one character puts it and to rat out their neighbors creates a world in which good men find themselves resorting to desperate measures to maintain their hold on the land and a way of life that is falling apart.

Now for some excerpts from the production notes...

So, barring disaster, I expect this to become public probably tomorrow (if the schedule leaks a day early like last year). Or at the latest, Friday, when the Festival begins.

It would be awesome if Zac can turn up there as well. There was already a rumor about him going but unclear if true since their timeline was off in re: him needing to be in Venice.
Collapse