This overlaps into personal time but when it is Roberto Cavalli blogging about it, it's somewhat notable, lol. 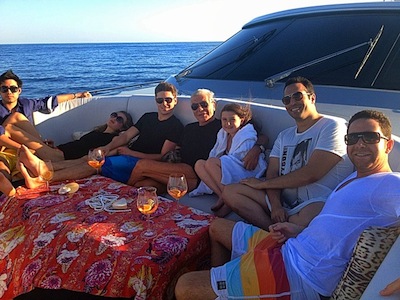 The first night my luck turns the right way. While I am playing a guy with a sweet open smile approaches me and shakes my hand complimenting me on my fashion. He introduces me to his friends while Sandra whispers “Roberto, the first person you have just been introduced to is a great young actor, the most popular with boys and girls!” I did not catch his name at first, but no matter, his smile was a business card enough for us to exchange phone numbers!

Only later, Tommaso told me that Ester has a secret crush on ZAC EFRON and that when she finds out that we met him she will be dying to meet him!

We too wanted to see those guys again with whom we had got along so well! I sent a short message to Zac to invite all five to dinner on my boat! We did not had to wait long for an answer. They were happy to come and would arrive by boat at ten!

We said nothing to Ester, we kept her in suspense throughout the day… Perhaps she suspected something… too good to be true!

My eyes were all for her, I was so happy to give a thrill to my granddaughter… only a grandfather could do it as I did and take as much pleasure from it!

Even I was excited, I must admit, I liked these five guys, sweet and sure of themselves! I remembered when I was their age! That evening, to show that I was one of them, with white hair, I showed off all my ability to conquer… to be “simpatico”…

We ended the evening together at the Casino… one thing united us… we all lost… having fun!

All Zac’s friends were special as was he… Alessandra, a beautiful Swedish girl, a friend to all… who seem to demonstrates a greater focus on Zac. Hamza … Mohammed … Justin … I believe that together they have created a film production company to produce Zac’s movies.

We have already organized a holiday together at the end of July in Saint Tropez!