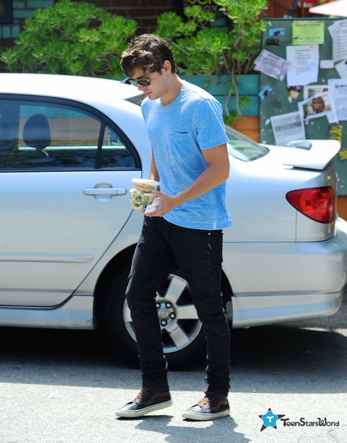 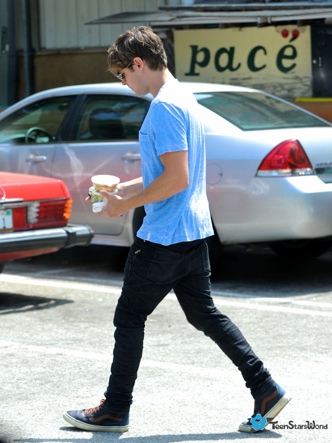 ETA this article from herald.ie: The growing pains of a tweed [sic, lol] idol.

Josh Radnor on Zac, from thisisfakediy.co.uk:

On how he met and cast Zac Efron.
"Zac Efron is a young actor [laughs] that I met at the Maui Film Festival where he was being honoured with a shining star, fresh-faced star person award. We ended up having some really great conversations, and I remember watching him do this Q&A where there were hundreds of screaming, shrieking girls. I felt for the guy, but there was something really sweet about the way he was dealing with it, as he was really trying to talk about his career and the choices he was making. There was a sincerity that came through that I really liked. There was something I appreciated about his manner.

When I was writing the role of Nat, this mystical, philosophising character on campus... the thing about Nat, is that I believe everything he says, even though it comes from a different part of myself - including that crop circles are weird and that we should be paying more attention to them. I didn't want that role to be played ironically. He's funny, but I wanted it to be played with a big, open heart. When I thought of Zac, I thought it would be a really interesting casting choice. He and his manager got really excited about it, because it's not like anything he had done. I was trying to hide him in this Peruvian hat, and tried to de-Efron him. I think he does really well, and I enjoyed working with him."

BTW, someone asked on Twitter about status of the Liberal Arts release and the latest out there is from people at DIFF who heard it was coming out in September. But idk that timing is something that's set in stone yet.

Also ETA: Liberal Arts will be screened at the Seattle International Film Festival. Thanks to kleth for pointing that out. Details on the festival are at ropeofsilicon.com, but full info on dates, etc. should be available when the schedule is released on May 3rd.

Zac on the film, from thisisfakediy.co.uk:

Efron told us he hoped to attend the Cannes Film Festival next month for The Paperboy, which is in competition for the Palme d'Or. He then admitted his casting was a gamble for the Oscar-nominated director: "Lee Daniels is an amazing guy. I was very blessed to be able to work with him. He took a risk on me for that. A big one."

The actor then gushed about his co-star Kidman: "When I'm able to work with people I have the utmost respect for and admiration for all their choices. Living the life and putting out such integrity with all their choices, and risk in all their choices - Nicole embodies that 100%. Every time I had a scene with her I felt like I was in Moulin Rouge, I was so in love with her!"

You signed on to "The Butler" after working with Daniels in "The Paperboy," which just got into Cannes. What's Lee like as director?
He didn't take his foot off the gas pedal. He's an intense director. We had a really great time. It was sort of like the Poe thing. It wasn't pleasant, but it was exhilarating. It was nasty. My character inflicts a lot of damage on people.

Oh and btw, NYE comes out on DVD/Blu-ray today. From what I understand, Zac is barely in the special features and what he is in, we've mostly already seen and/or heard before. I will double-check this later myself but just fwiw, unless I hear or see differently, I probably will not be posting them or uploading them to youtube.
Collapse