Liberal Arts will be shown at the Hawaii International Film Fest Spring Showcase. Screenings will be on April 13th and 16th. I don't really expect any of the cast to go but fwiw, more details available here.

From CBS, confirmation of his appearance on CBS Sunday Morning and a preview:

During a walk-through of the private boot camp where he trained for his role as a Marine in his new film, The Lucky One, Zac Efron talks to Tracy Smith about some of the lucky breaks early on his career, and the labels that came with success.

An excerpt from the interview is below.

SMITH: For those of us who will never be a heartthrob, just explain what that’s like.
EFRON: I can't explain to you what it's like to be a heartthrob. I don't think I am a heartthrob.
SMITH: What do you think of that word, heartthrob?
EFRON: Heartthrob? I hate it. I hate it. It follows you around, but you don't deserve it. It’s like, "Why?"
SMITH: So how do you see yourself?
EFRON: I'm just me. I'm just Zac. Just Zac.

The full interview will broadcast Sunday, April 1, on the CBS SUNDAY MORNING WITH CHARLES OSGOOD (9:00-10:30 AM/ET) on the CBS Television Network. Rand Morrison is the Executive Producer. 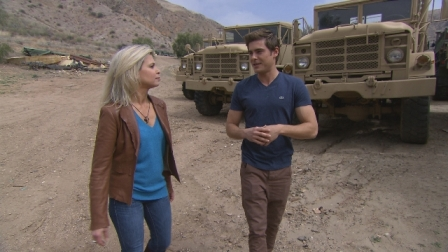 Also, an appearance on Jimmy Kimmel has been scheduled for April 16th.

Zac made a video inviting you to enter to win a trip to the LA premiere for The Lucky One. Details for the contest are here and the video is ( Collapse )