There should be a couple more of these coming, but this set report, from comingsoon has some great info. 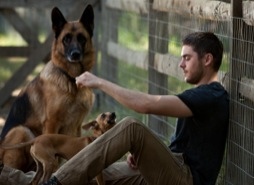 December in Louisiana is quite a bit chillier than one might expect and, as press gather behind director Scott Hicks as he sets up an outdoor scene for The Lucky One, everyone is thankful for the portable heaters that line the perimeter of the frame.

Although Nicholas Sparks' 2008 novel takes place primarily in North Carolina, the film has shifted the focus to Louisiana and is currently shooting in and around a welcome center in Covington (not far from New Orleans). The outside serves as a farmer's market visited by Taylor Schilling's Beth Clayton and Blythe Danner's Nana. Covered in pumpkins, colored leaves and other signs of suburban fall, the area also features a Marine recruitment table that connects the peaceful scene to Iraq, where the story begins for Zac Efron's US Marine Sergeant Logan Thibault. Returning to Colorado after a third tour of duty, Logan sets out on a walk across America to find the woman pictured on his lucky charm, a photograph he found in the middle eastern desert.

"I think there's nothing as extreme as being out there in a war," Efron says of his character. "Coming home, he's forced to sort of rediscover his life or whatever. What's next? He's on his own to find out what ultimately makes him happy and what he wants to do. I think it's very different from taking orders and being with your brothers constantly and fighting a war and then trying to live your life after and find love."

Sadly they probably won't have time to drive the Great Ocean Road between Melbourne and Adelaide, lol.
Collapse