I'm not going to post the entire thing, but here are the sections regarding Zac from The Lorax Production Notes. 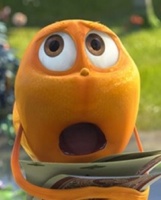 The role of the passionate and curious 12-year-old named Ted went to Zac Efron, known to audiences for the High School Musical series and the hit musical Hairspray. Though the character is much younger than the actor, the filmmakers knew that Efron’s charm and youthful spirit would serve the character well. It was more important to cast someone who could bring life to the character in a unique and passionate way than it was to stay true to the literal age of Ted. Meledandri says: “Zac is a gifted actor and has a boyish charm that makes him irresistible. He is able to channel that charm in his voice performance.”

There is also interesting stuff on how the CGI was so crazy because of all the fur. They discuss the musical aspects of The Lorax too. That section does not specify if Zac (or Taylor for that matter) sings, but does say that Ed Helms has several songs. I'm super excited for that, lol.

Jealous of the mustaches tbqh. And where are the screenings for Zefron bloggers??? lol.

It sounds like they are doing junket stuff tomorrow. So that's cool and fun :) I wonder if they'll do any interviews with costars. Ed and Zac would be so hilarious. Actually any of them together, I like everyone in this cast so you can't go wrong.

ETA: btw I'm not posting a picture of his shoes getting in a car, that's just silly.