I debated posting this cause it really is no big deal but since it isn't a big deal, I see no reason not to post it cause it is related to The Paperboy production. Stuff like this happens and not infrequently. Just too bad they were in LA and out in the open. I can never get TMZ's videos to embed so if you feel like watching this click on pic for their site: 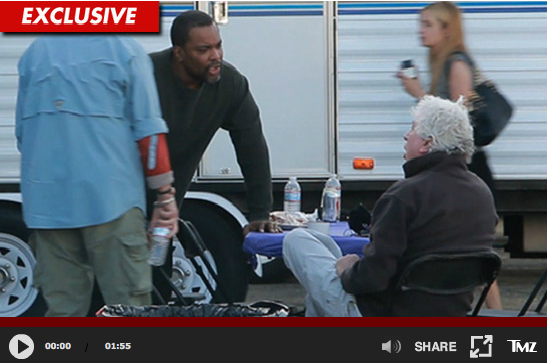 TBH, I haven't even bothered watching, TMZ is always obviously baiting and when don't directors and producers haggle. This is especially true over money and especially with producer Avi Lerner who is, shall we say, frugal... I linked this awhile ago but here are some excerpts from THR's profile of Avi:

[Lerner] throws down his BlackBerry in disgust. "They always want more," he says. "They ask $4 million when they should be getting 4 dollars! They should be paying me." Then he laughs, shaking his head at his own exasperation. "Every day another movie, another problem," he groans, secretly enjoying every one of them...

"I felt very strongly about [Lee Daniels] -- he's meshuggah," he says fondly, using the Yiddish word for crazy -- "and CAA top people ask me to do it. Maybe -- maybe -- those people will remember I put this together."

He doubts it. Make no mistake: Lerner isn't looking for favors or acclaim. At his heart, he's a bottom-line guy, someone who won't spend a penny more than he has to, who's notoriously careful with his budgets while simultaneously being one of the few independents truly able to make a project happen....

Anyway, I've been told the video really isn't that bad. And as stated on TMZ, "We contacted reps for both honchos, and were told, 'Both parties laughed it off,' adding, 'We hope the footage also shows them hugging moments later.'"

The Necessary Death of Charlie Countryman

Per Variety, Zac is out and Shia LaBeouf is back in as the title character. IDK when exactly Zac dropped the project. It was taken off his BL/SS pretty recently but it disappeared from his IMDB awhile ago, I think in August. That was around the time that there were rumors of Owen Wilson being attached in another role.

It sounds like a timing thing since they want to move on the project now and Zac is busy with promo and other things. Also I think we always felt that there was a lot of similarity between this story and Die in a Gunfight and one would have to be tabled eventually so that may have been part of this also. I liked Charlie Countryman better but Die in a Gunfight went through a rewrite so hopefully that fixed some of the problems and it is now the better choice.

This is a tiny thing. It looks like this recently was named, at least for now, Townies. No further info was updated.

The Ever After Part

As a refresher, this is what we knew before about this project which is in development at NRW.

The updates to this are that in late November a draft of the script was completed and in early December was being shopped around. No word on whether it ever sold though. Which is a good thing and a bad thing. Bad in that it is always nice to sell a project but good in the sense that I don't think the script was ready. I read it and I think it needs work. I won't give a full review, there's no point right now (and sorry I cannot share it per the terms of the site where I got it). But first things first this isn't a dark action rom-com so idk whether that twitter from the first post was something else or what (though the timing really suggested it was related to this but who knows).

I briefly mentioned when those pics of him at a meeting came out that I thought I might have an idea of what it was about. TBH, I thought it might be this project given it had gone out at the beginning of the December but we still haven't heard anything about its status so idk. The people photographed are a part of his company and so it was about something they are working on but I don't know what.
Collapse