A unnamed Russian billionaire dropped $135,060 on his bar bill at Board Room nightclub early Wednesday morning.

But the item that really stands on the bill out is the bottle of champagne the generous spender -- who did not want to be indentified -- spent on actors Heather Graham and Zac Efron, who were sitting in the same section.

He dropped $100,000 on a 15 litre bottle of Armand de Brignac Nebuchadnezzar Champagne, also known as "Ace of Spades."

...The two actors are in the city filming the movie "Heartland" and spent about two hours in the club -- hardly enough time to drink the entire bottle, which contains enough bubbly to fill about 20 regular sized bottles...

And the lucky server walked away with a gratuity of $22,510.

oh to be so famous and rich people give you shit for free. 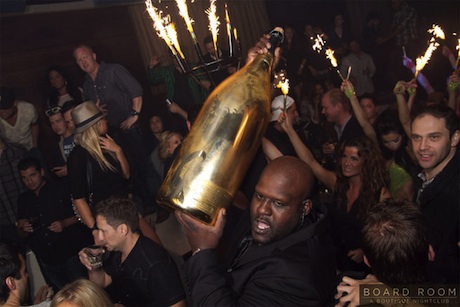