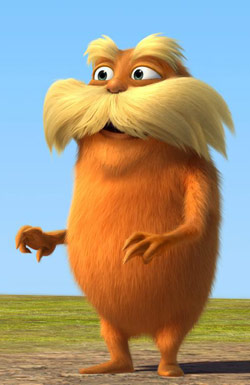 Christopher Meledandri talked during Hop promotion in an interview with Collider a bit about The Lorax. Here is what he said:

"Danny DeVito [is] voicing the Lorax and Zac Efron [is] voicing the role of Ted in a cast that involves Rob Riggle, Betty White [and] Taylor Swift. It’s a terrific voice cast. The film is visually absolutely distinctive and extremely powerful visually. It is a complex film from a story perspective, because the film is a story within a story. We’re, I’d say, about 30% through animation [and] I’m very pleased with how it’s going."

Poor Ed Helms got forgotten. But Christopher's story in a story comment reinforces the impression of the logline we got a few days ago: that Zac's part could actually be a bit bigger than many of us thought initially since it sounds as he is the main figure in the 'outside' story. You can watch the full video interview with Meledandri below; talk about The Lorax starts around 2:57: 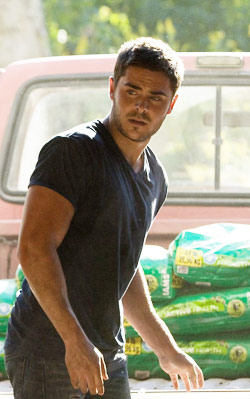 The Maroon also had an article about Zac's piano hand-double in The Lucky One. Here's the part about Zac:

The piano performance junior recently appeared in the upcoming film "The Lucky One" as the hands of Zac Efron.

Mayon was recommended for the once-in-a-lifetime opportunity to act as a hand double in the film by orchestra director Jean Montés,

"He called me one day and was like, ‘Hey I got a job for you, maybe if you want to be a hand double for this movie,'" said Mayon.

Apprehensive about doing a minor production for one of his peers, Mayon was taken aback when he learned who the actor he was to portray was. "Professor Montés said Zac Efron and I said, all right, I'm going to have to go for it."